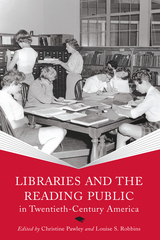 For well over one hundred years, libraries open to the public have played a crucial part in fostering in Americans the skills and habits of reading and writing, by routinely providing access to standard forms of print: informational genres such as newspapers, pamphlets, textbooks, and other reference books, and literary genres including poetry, plays, and novels. Public libraries continue to have an extraordinary impact; in the early twenty-first century, the American Library Association reports that there are more public library branches than McDonald's restaurants in the United States. Much has been written about libraries from professional and managerial points of view, but less so from the perspectives of those most intimately involved—patrons and librarians.
Drawing on circulation records, patron reviews, and other archived materials, Libraries and the Reading Public in Twentieth-Century America underscores the evolving roles that libraries have played in the lives of American readers. Each essay in this collection examines a historical circumstance related to reading in libraries. The essays are organized in sections on methods of researching the history of reading in libraries; immigrants and localities; censorship issues; and the role of libraries in providing access to alternative, nonmainstream publications. The volume shows public libraries as living spaces where individuals and groups with diverse backgrounds, needs, and desires encountered and used a great variety of texts, images, and other media throughout the twentieth century.
AUTHOR BIOGRAPHY
Christine Pawley and Louise S. Robbins have both served as professor and director of the School of Library and Information Studies at the University of Wisconsin–Madison. Pawley's publications include Reading Places: Literacy, Democracy, and the Public Library in Cold War America. Robbins is author of The Dismissal of Miss Ruth Brown: Civil Rights, Censorship, and the American Library.
REVIEWS
"The focus on libraries not as cold, impersonal institutions engaged in promulgating top-down policies but rather as spaces populated by people with diverse backgrounds, needs, and values is what makes this volume valuable."—Joan Shelley Rubin, University of Rochester


“This reader is especially gratified to see so many of the essays in this valuable collection infused with the insights of contemporary critical social theory.”—Library & Information History


Preface
Introduction
Christine Pawley
Part 1: Methods and Evidence
Main Street Public Library: Community Spaces and Reading Places in the Rural Heartland
Wayne A. Wiegand
Reading Library Records: Constructing and Using the "What Middletown Read Database"
Frank Felsenstein, John Straw, Katharine Leigh, and James J. Connolly
"Story Develops Badly Could Not Finish": Member Book Reviews at the Boston Athenaeum in the 1920s
Ross Harvey
"A Search for Better Ways into the Future": The Library of Congress and Its Users in the Interwar Period
Jane Aikin
Part 2: Public Libraries, Readers, and Localities
Going to "America": Italian Neighborhoods and the Newark Free Public Library, 1900–1920
Ellen M. Pozzi
"A Liberal and Dignified Approach": The John Toman Branch of the Chicago Public Library and the Making of Americans, 1927–1940
Joyce M. Latham
Counter Culture: The World as Viewed from Inside the Indianapolis Public Library, 1944–1956
Jean Preer
Part 3: Intellectual Freedom
Censorship in the Heartland: Eastern Iowa Libraries during World War I
Julia Skinner
Obscenity in Iowa: Locating the Library in the Non-Library Censorship of the 1950s
Joan Bessman Taylor
"Is Your Library Family Friendly?" Family Friendly Libraries and the Pro-Family Movement
Loretta M. Gaffney
The Challengers of West Bend: An Institutional Approach
Emily Knox
Part 4: Librarians and the Alternative Press
Meta-Radicalism: The Alternative Press by and for Activist Librarians
Alycia Sellie
From the Underground to the Stacks and Beyond: Girl Zines, Zine Librarians, and the Importance of Social and Textual Circulation
Janice A. Radway
Contributors