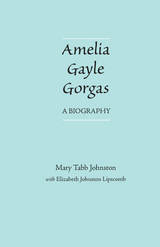 The daughter of John Gayle (lawyer and political leader who was governor of Alabama from 1831 to 1835), the devoted wife of Josiah Gorgas (chief of ordnance for the Confederacy), and the loving mother of William Crawford Gorgas (surgeon-general of the United States Army) and five other children—Amelia Gayle Gorgas (1826-1913) was all these things and a fascinating person in her own right—an antebellum Southern woman who made the transition to postbellum life and survived the difficult readjustments of the defeated South. Her biography is not just another account of a hero’s daughter, wife, or mother.

The authors skillfully avoid overdramatizing their heroine— though she lived in dramatic times—and emphasize the strength, flexibility, and resiliency that characterized so many of the purportedly fragile, helpless Southern women of her generation. In turn, Amelia adapted herself readily to the relative prosperity of her early married life as wife of a United States Army officer in Maine, to the tensions and dangers of the Confederate capital Richmond during the Civil War, to the struggle to make a new life in the economically depressed South in the period immediately after the war, and to the postwar pleasures and problems of academic communities at The University of the South in Sewanee, Tennessee, and The University of Alabama in Tuscaloosa, Alabama.

As told by Mary Tabb Johnston and Elizabeth Johnston Lipscomb, the life-story of this extraordinary woman is a delightful, fast-moving narrative indeed—a “good read” for young and old alike. The authors’ scholarship is extensive and penetrating, and yet their style is as graceful and enticing as their subject.