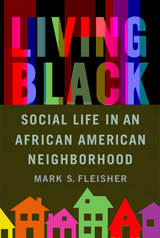 Living Black breaks the stereotype of poor African American neighborhoods as dysfunctional ghettos of helpless and hopeless people. Despite real and enduring poverty, the community described here—the historic North End of Champaign, Illinois—has a vibrant social life and strong ties among generations. But it operates on its own nonjudgmental terms—teen moms aren’t derided, school dropouts aren’t ridiculed, and parolees and ex-cons aren’t scorned.
Mark S. Fleisher offers a window into daily life in this neighborhood, particularly through the stories of Mo and Memphis Washington, who fight to sustain a stable home for their children, and of Burpee, a local man who has returned to the North End to rebuild his life after years of crime and punishment in Chicago.

“Outstanding” books for public & secondary school libraries from university presses, American Library Association
AUTHOR BIOGRAPHY
Mark S. Fleisher is a research professor in the Jack, Joseph, and Morton Mandel School of Applied Social Sciences at Case Western Reserve University. He formerly worked at the Federal Bureau of Prisons and at Illinois State University. He is the author of Beggars and Thieves, Dead End Kids, and Warehousing Violence.
TABLE OF CONTENTS