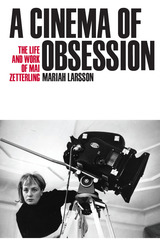 Mai Elizabeth Zetterling (1925–94) is among the most exceptional postwar female filmmakers. Born in Sweden, she lived in England and France for most of her life, making her directorial debut in 1964 with the Swedish art film Loving Couples after a fraught transition from working in front of the camera as a successful actress.
Critics have compared her work to that of Ingmar Bergman, Luis Buñuel, and Federico Fellini, but Zetterling had a distinct style—alternately radical and reactionary—that straddled the gendered divide between high art and mass culture. Tackling themes of sexuality, isolation, and creativity, her documentaries, short and feature films, and television works are visually striking. Her oeuvre provoked controversy and scandal through her sensational representations of reproduction and motherhood.
Mariah Larsson provides a lively and authoritative take on Zetterling's legacy and complicated position within film and women's history. A Cinema of Obsession provides necessary perspective on how the breadth of an artist's collected works keeps gatekeepers from recognizing their achievements, and questions why we still distinguish between national and global visual cultures and the big and small screens in the #MeToo era.
AUTHOR BIOGRAPHY
Mariah Larsson is a professor of film and literature at Linneaus University. She is the author of The Swedish Porn Scene: Exhibition Contexts, 8mm Pornography and the Sex Film and the coeditor of Swedish Cinema and the Sexual Revolution: Critical Essays.
TABLE OF CONTENTS