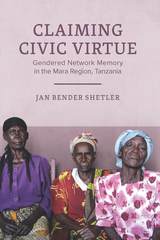 Among communities in the Mara region of Tanzania, it is considered men’s responsibility to maintain “history.” But when Jan Bender Shetler’s questions turned to specific familial connections within the village, she discovered her male informants had to occasionally leave the room—to ask their wives for clarification. The result is an original and wide-ranging investigation of the gendered nature of historical memory and its influence on the development of the region over the past 150 years. Shetler’s exploration of these oral traditions and histories opens exciting new vistas for understanding how women and men in this culture tell their stories and assert their roles as public intellectuals—with important implications for research in African and gender studies, and the history of ethnicity and nationalism.
AUTHOR BIOGRAPHY
Jan Bender Shetler is a professor of history at Goshen College. Her books include Telling Our Own Stories, Imagining Serengeti, and Gendering Ethnicity in African Women’s Lives.
REVIEWS
“A major accomplishment. Shetler persistently approaches female-centered knowledge of the past as an alternative to male-centered forms. The result is a social history of patronage and rights networks in which female-curated knowledge is central. Guaranteed to be of wide interest among students of gender in history, anthropology, and East African studies.”—David J. Schoenbrun, Northwestern University