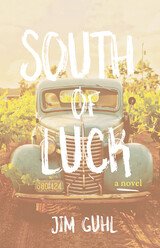 It’s the summer of 1945, and sixteen-year-old ruffian Milo Egerson has been shipped from his Minneapolis home to his great-uncle Ham’s farm in rural northwestern Wisconsin. Though his mother puts on a smile and says it’ll do him good to be out in nature, they both know otherwise. Milo’s stepfather, the one who gave him that jagged scar, is set to be released from Stillwater Prison soon and has already promised to finish what he started.

Hoping there are enough miles between the Twin Cities and dusty Milltown, Milo sets about trying to make the most of life without running water and electricity while trying to better understand his own place in the world and what it all means. His tough-guy act softens as he blends into the community and befriends an endearing group of small-town folks. And that’s lucky for him, because to stay safe, he’s going to need all the help he can get.
AUTHOR BIOGRAPHY
Jim Guhl is the award-winning author of Eleven Miles to Oshkosh and many short stories. He lives in Hudson, Wisconsin.
REVIEWS
“This is an author who knows how to write fiction. Guhl successfully captures the rural Wisconsin atmosphere during WWII. The story is engaging, the characters are humorous and believable. Even Milltown developed its own likeable personality. I truly enjoyed this very clever book.”—Sara Rath, author of The Waters of Star Lake