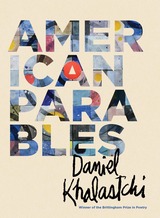 American Parables
by Daniel Khalastchi
University of Wisconsin Press, 2021
Paper: 978-0-299-33574-8
Daniel Khalastchi's third collection provides an uncompromising exploration into the political and societal disturbances facing America today. Electioneering, lack of affordable health care, the increase in mass shootings, and the continued fight for equal rights are juxtaposed against an unlikely sense of hope and optimism. Lurking behind each page is the ever-present issue of immigration, with specific focus on the escape of the author's father from Iraq and the pressures linked to living as an Arab Jew in the middle of the United States.

Through unnerving gallows humor and radical honesty, these poems redefine the American experience by asking the reader to consider what it means to live in the shadow of a perceived sense of freedom and to have faith when believing feels hopeless. Khalastchi's perspective as an Iraqi Jewish American brings sharp focus to the holistic uncertainties of religion, politics, assimilation, illness, love, and loss—with absurd, visceral, and wry acclaim.
I type into
the internet your high school
and find rubble. Your daughter
has the flu. We are sick
with disappointment but
everyone is fine.
—Excerpt from "First Generation: Our Escape"
AUTHOR BIOGRAPHY
Daniel Khalastchi is the author of Manoleria and Tradition, and his poems have appeared in The Believer Logger, Colorado Review, The Iowa Review, and The Rumpus. He lives in Iowa City where he directs the University of Iowa's Magid Center for Undergraduate Writing; he is also the co-founder and managing editor of Rescue Press.
REVIEWS
"When the world is turned upside down, when vaccines are 5G and democracy is fascism and insurrection is freedom of speech, satire is often the most acute mirror to interpret an age. Vivid, bleak, and startling, American Parables is an allegorical masterpiece of mordant irony I plan to carry with me in this uncertain post-JAN6 era."—Carmen Giménez Smith


"A book of love poems, honest love poems. All of Khalastchi's well-wrought declarations make clear that love only occurs in the midst of survival. His poetry reclaims an exact and exacting language for joy in the midst of a capitalist state that does not require it."—Jericho Brown, Pulitzer Prize-winning author of The Tradition


"There is something miraculous and vital in the art Khalastchi makes of it all: the complicated humor of cat and mouse; the courage of elegy; the fulfillingness of matrimony; the reasons that love won't disappear. Khalastchi has always been a shining star in the world of poetry, and this collection cements his place in the firmament."—D. A. Powell, author of Useless Landscape, or A Guide for Boys

When on the Scale of Human Suffering
Returning Home from Having Failed
Land Resettlement Contract
Trigger Warning
Deviation on Returns
American Parable
Congenital Persuasion Spectacle
First Generation: Your War
This Indigenous Tsuris
Trigger Warning
With Me You Are Inviting Trouble
American Parable
Our Shared Relevant Irrelevance or A Brief History of Love