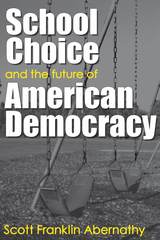 In School Choice and the Future of American Democracy, Scott Franklin Abernathy shows what is lost in the school choice debate. Abernathy looks at parents as citizens who exert power over the educational system through everything from their votes on school budgets to their membership on school boards. Challenging the assumption that public schools will improve when confronted with market-based reforms, Abernathy examines the possibility that public schools will become more disconnected and isolated as civic life is privatized.

"Scott Abernathy takes up big questions and provides answers grounded in the complex reality of policy and politics. School Choice and the Future of American Democracy is a book written for those who understand that the world does not fit the simple explanations too often put forward."
--Clarence Stone, Professor Emeritus, University of Maryland, and Research Professor, George Washington University

"Will school choice revive or eviscerate democratic processes and institutions? Will it narrow or exacerbate the range of educational inequities? This book takes several differently angled slices into these questions and draws intriguing answers."
--Jeffrey R. Henig, Teachers College, Columbia University, and author of Rethinking School Choice: Limits of the Market Metaphor

"Through extensive research and refreshingly impartial analysis, Scott Abernathy probes how the use of market principles to reform public schools affects democratic citizenship. Treating citizens first and foremost as customers, he finds, threatens civic engagement and the well-being of schools, especially in the nation's neediest communities. This thoughtful and balanced appraisal is must-reading for those concerned about the future of American education and democracy."
--Suzanne Mettler, Alumni Associate Professor, Syracuse University, and author of Soldiers to Citizens: The G.I. Bill and the Making of the Greatest Generation