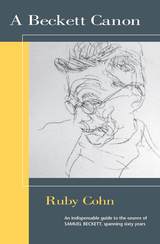 Samuel Beckett is unique in literature. Born and educated in Ireland, he lived most of his life in Paris. His literary output was rendered in either English or French, and he often translated one to the other, but there is disagreement about the contents of his bilingual corpus. A Beckett Canon by renowned theater scholar Ruby Cohn offers an invaluable guide to the entire corpus, commenting on Beckett's work in its original language.
Beginning in 1929 with Beckett's earliest work, the book examines the variety of genres in which he worked: poems, short stories, novels, plays, radio pieces, teleplays, reviews, and criticism. Cohn grapples with the difficulties in Beckett's work, including the opaque erudition of the early English verse and fiction, and the searching depths and syntactical ellipsis of the late works.
Specialist and nonspecialist readers will find A Beckett Canon valuable for its remarkable inclusiveness. Cohn has examined the holdings of all of the major Beckett depositories, and is thus able to highlight neglected manuscripts and correct occasional errors in their listings. Intended as a resource to accompany the reading of Beckett's writing--in English or French, published or unpublished, in part or as a whole--the book offers context, information, and interpretation of the work of one of the last century's most important writers.
Ruby Cohn is Professor Emerita of Comparative Drama, University of California, Davis. She is author or editor of many books, including Anglo-American Interplay in Recent Drama; Retreats from Realism in Recent English Drama; From Desire to Godot; and Just Play: Beckett's Theater.
TABLE OF CONTENTS
Contents
Abbreviations and Conventions
1929–31 Rather Too Self-Conscious
1932–33 Intricate Festoons of Words
1934–36 These Demented Particulars
1937–40 No Trifle Too Trifling
1941–45 Semantic Succour
1946 J’Ouvre la Série
1947–49 Mais la Réalité, Trop Fatigué Pour Chercher le Mot Juste
1950–52 Rien à faire
1953–58 Then These Flashes, or Gushes
1959–61 Fresh Elements and Motifs
1962–69 A Little Rush, Then Another
1970–76 Soudain ou Peu à Peu
1977–89 Comment Dire
Appendix 1: Beckett and Performance
Appendix 2: Beckett’s Self-Translations
Notes
Works Cited
Index of Works by Beckett
Index of Proper Names
REQUEST ACCESSIBLE FILE