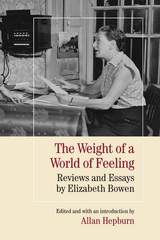 Elizabeth Bowen began reviewing books in August 1935. By that time she was already an experienced fiction writer with four short story collections and four novels to her credit. Her fifth novel, The House in Paris, was published on 26 August 1935, just nine days after her first book review appeared in The New Statesman. She reviewed regularly for that journal, known for its commitment to leftist politics, until 1943. At the same time, she accepted requests to review for Purpose, The Spectator, The Listener, The Bell, The Observer, and other publications. From 1941 until 1950, and again from 1954 until 1958, she filed weekly columns for The Tatler and Bystander. Especially after she began to travel time to the US in the 1950s, she was asked to review books for The New York Times Book Review and The New York Herald Tribune.

This fascinating collection of reviews is filled with first impressions of novels, autobiographies, memoirs, illustrated books, biographies of politicians and artists, short story collections, and literary criticism. Books spark statements from Bowen about general principles of fictional technique; she articulates her understanding of the inner workings of fiction incidentally, while providing an opinion about the book at hand. In this volume, Hepburn draws together all the reviews that Bowen left uncollected in her non-fiction collections, as well as several more familiar essays that that she published in The Tatler, in order to make them accessible to a broader audience.
AUTHOR BIOGRAPHY
ALLAN HEPBURN is James McGill Professor of Twentieth-Century Literature at McGill University.
TABLE OF CONTENTS