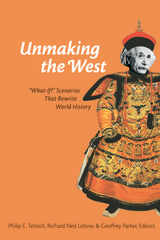 What if the Persians had won at Salamis? What if Christ had not been crucified? What if the Chinese had harnessed steam power before the West? Disparaged by some as a mere parlor game, counterfactual history is seen by others as an indispensable historical tool. Taking as their point of inquiry the debate over the inevitability of the rise of the West, the eminent scholars in Unmaking the West argue that there is no escaping counterfactual history. Whenever we make claims of cause and effect, we commit ourselves to the assumption that if key links in the causal chain were broken, history would have unfolded otherwise. Likewise, without counterfactual history we all too easily slip into the habit of hindsight bias, forgetting, as soon as we learn what happened, how unpredictable the world looked beforehand, and closing our minds to all the ways the course might have changed. This collection is thus both an exploration of alternative scenarios to world history and an exercise in testing the strengths and weaknesses of counterfactual experiments.

"If ever there was an argument for the usefulness of counterfactual history, this admirable, and admirably focused, collection has convincingly made it."
—Robert Cowley, editor of the What If?TM series

"With chapters ranging from politics to war to religion to economics and to science and technology, this is the most thematically wide-ranging collection on counterfactuality. An intelligent, cutting-edge study with important things to say."
—Jonathan C. D. Clark, Department of History, University of Kansas
"This volume is likely to become a standard reference in the literature on historical methodology, and could have a dramatic impact on the way future generations of historians approach disciplinary inquiry. . . . By allowing readers to share in the doubts and epiphanies that lead up to the authors' epistemological revelations, the volume allows readers to grasp the rich potential of approaching their own research from a counterfactual perspective."
—Aaron Belkin, Associate Professor of Political Science, University of California, Santa Barbara

Philip E. Tetlock is Mitchell Professor, Haas School of Business, University of California, Berkeley, and author of Expert Political Judgment: How Good Is It? How Can We Know?
Richard Ned Lebow is James O. Freedman Presidential Professor of Government at Dartmouth College and author of The Tragic Vision of Politics: Ethics, Interests and Orders, winner of the Alexander L. George Award for the best book in political psychology.
Geoffrey Parker is Andreas Dorpalen Professor of History at Ohio State University, a Fellow of the British Academy, and author of The Military Revolution: Military Innovation and the Rise of the West, 1500-1800, winner of two book prizes.