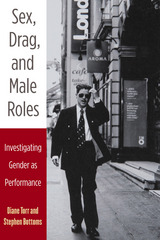 "Few books blend the critical and creative approaches to drag performance this provocatively and engagingly, and none provides both the historical and the personal perspectives so effectively. Torr and Bottoms fundamentally challenge many long-standing ideas about drag kings and the performance of masculinity."
---Sarah Bay-Cheng, University at Buffalo

"This book brings the reader inside an artist's creative imagination and intellect, showing us Diane Torr's work in a detailed, thoughtful, and engaging way. We discover how Torr uses different physical disciplines to explore how gender is constructed, interpreted, and expressed. Along the way---by taking us into various venues in which she performed---she evokes the lively, dynamic scene in New York in the '80s and '90s."
---Alisa Solomon, Columbia University

Why would women want to perform as men? Why is gender crossing so compelling, whether it happens onstage or in everyday life? What can drag performance teach, and what aesthetic, political, and personal questions does it raise?

Performance artist Diane Torr has been experimenting with the performance of gender for thirty years---exploring everything from feminist go-go dancing to masculine power play. One of the key pioneers of "drag king" performance, Torr has been celebrated internationally for her gender transformation workshops, in which she has taught hundreds of ordinary women how to pass as men on city streets around the world. This cultural subterfuge appeals to participants for many different reasons: personal confidence-building, sexual frisson, gender subversion, trans-curiosity, or simply the appeal of disguise and role play.

Sex, Drag, and Male Roles documents the evolution of Torr's work by blending first-person memoir and commentary from Torr with critical reflections and contextualization from leading performance critic Stephen J. Bottoms. The book includes a consideration of the long cultural history of female-to-male cross-dressing and concludes with Torr's "Do-It-Yourself" guide to becoming a "Man for a Day."

Diane Torr developed her cross-disciplinary art in the downtown New York art scene from 1976 to 2002. Now living in Scotland, Torr has earned an international reputation for her performances and gender transformation workshops (featured on HBO, BBC, and This American Life on NPR, among others). Her work is the focus of a feature film, Man for a Day.

Stephen J. Bottoms is Wole Soyinka Professor of Drama and Theatre Studies at the University of Leeds. His books include Playing Underground: A Critical History of the 1960s Off-Off-Broadway Movement and Small Acts of Repair: Performance, Ecology, and Goat Island.

"Written in a clear, humorous, and intelligent dual voice, Torr and Bottoms's collaboration is a moving document."
— Contemporary Theatre Review

"Rich in both critical and historical content as well as personal narratives, it fills a gap in the critical literature dealing with gender impersonation."
—Theatre Quarterly Review