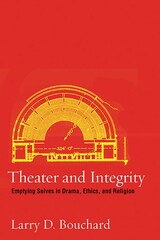 Four decades ago Tom F. Driver brought theater into discussion with religion and modern theology. It has been a rich ongoing dialogue, but one that now demands a bold new engagement. In Theater and Integrity, Larry D. Bouchard argues that while the “antitheatrical prejudice” regards theater as epitomizing the absence of integrity, theater’s ways of being realized in ensembles, texts, and performances allow us to reenvision integrity’s emergence and ephemeral presence. This book follows such questions across theatrical, philosophical, and theological studies of moral, personal, bodily, and kenotic patterns of integrity.

It locates ambiguities in our discourse about integrity, and it delves into conceptions of identity, morality, selfhood, and otherness. Its explorations ask if integrity is less a quality we might possess than a contingent gift that may appear, disappear, and perhaps reappear. Not only does he chart anew the ethical and religious dimensions of integrity, but he also reads closely across the history of theater, from Greek and Shakespearean drama to the likes of Seamus Heaney, T. S. Eliot, Caryl Churchill, Wole Soyinka, Tony Kushner, and Suzan-Lori Parks. His is an approach of juxtaposition and reflection, starting from the perennial observation that theater both criticizes and acknowledges dimensions of drama and theatricality in life.
AUTHOR BIOGRAPHY

Larry D. Bouchard is Associate Professor of Religious Studies at the University of Virginia.