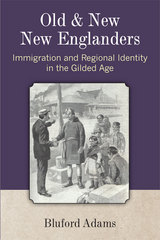 In Old and New New Englanders, Bluford Adams provides a reenvisioning of New England’s history and regional identity by exploring the ways the arrival of waves of immigrants from Europe and Canada transformed what it meant to be a New Englander during the Gilded Age. Adams’s intervention challenges a number of long-standing conceptions of New England, offering a detailed and complex portrayal of the relations between New England’s Yankees and immigrants that goes beyond nativism and assimilation. In focusing on immigration in this period, Adams provides a fresh view on New England’s regional identity, moving forward from Pilgrims, Puritans, and their descendants and emphasizing the role immigrants played in shaping the region’s various meanings. Furthermore, many researchers have overlooked the newcomers’ relationship to the regional identities they found here. Adams argues immigrants took their ties to New England seriously. Although they often disagreed about the nature of those ties, many immigrant leaders believed identification with New England would benefit their peoples in their struggles both in the United States and back in their ancestral lands.

Drawing on and contributing to work in immigration history, as well as American, gender, ethnic, and New England studies, this book is broadly concerned with the history of identity construction in the United States while its primary focus is the relationship between regional categories of identity and those based on race and ethnicity. With its interdisciplinary methodology, original research, and diverse chapter topics, the book targets both specialist and nonspecialist readers.

AUTHOR BIOGRAPHY
Bluford Adams is Associate Professor of English at the University of Iowa, with a joint appointment in the American Studies Department. An expert on 19th-century U.S. literature, culture, and social history, he is the author of E Pluribus Barnum: The Great Showman and the Making of U.S. Popular Culture.

TABLE OF CONTENTS
Contents
Introduction: Regional Identity in an Age of Immigration
1. World Conquerors or a Dying People? : Racial Theory, Regional Anxiety, and the Brahmin Anglo-Saxonists
2. New Ireland, New France, New England: The Place of Immigrants in American Regionalism
3. New England Delicacy: Immigration and the Regional Body
4. “Rural New England Is in a State of Transition”: Immigrants and Yankees on the Land
5. The New New England: Yankees and Immigrants in the Old Northwest
Coda: “The Pilgrims Were Illegal Aliens”
Notes
Index
REQUEST ACCESSIBLE FILE