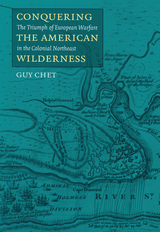 Conquering the American Wilderness: The Triumph of European Warfare in the Colonial Northeast
by Guy Chet
University of Massachusetts Press, 2003
Paper: 978-1-55849-382-7
A study of military tactics and strategy before the War of Independence, this book reexamines the conquest of the North American wilderness and its native peoples by colonial settlers. Historians have long believed that the peculiar conditions of the New World, coupled with the success of Indians tactics, forced the colonists to abandon traditional European methods of warfare and to develop a new "American" style of combat. By combining firearms with guerrilla-like native tactics, colonial commanders were able not only to subdue their Indian adversaries but eventually to prevail against more conventionally trained British forces during the American Revolution. Yet upon closer scrutiny, this common understanding of early American warfare turns out to be more myth than reality. As Guy Chet reveals, clashes between colonial and Indian forces during the seventeenth and eighteenth centuries did not lead to a reevaluation and transformation of conventional military doctrine. On the contrary, the poor performance of the settlers during King Philip's War (1675–76) and King William's War (1689–1697) prompted colonial magistrates to address the shortcomings of their military forces through a greater reliance on British troops and imperial administrators. Thus, as the eighteenth century wore on, growing military success in the New England colonies reflected an increasing degree of British planning, administration, participation, and command. The colonies' military and political leadership, Chet argues, never rejected the time-tested principles of European warfare, and even during the American War of Independence, the republic's military leadership looked to Europe for guidance in the art of combat.
AUTHOR BIOGRAPHY
Guy Chet is associate professor of history at the University of North Texas and author of The Ocean Is a Wilderness: Atlantic Piracy and the Limits of State Authority, 1688-1856 (University of Massachusetts Press, 2014).
TABLE OF CONTENTS