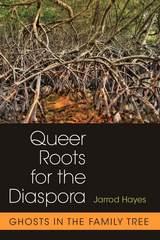 Employing rootedness as a way of understanding identity has increasingly been subjected to acerbic political and theoretical critiques. Politically, roots narratives have been criticized for attempting to police identity through a politics of purity—excluding anyone who doesn’t share the same narrative. Theoretically, a critique of essentialism has led to a suspicion against essence and origins regardless of their political implications.

The central argument of Queer Roots for the Diaspora is that, in spite of these debates, ultimately the desire for roots contains the “roots” of its own deconstruction. The book considers alternative root narratives that acknowledge the impossibility of returning to origins with any certainty; welcome sexual diversity; acknowledge their own fictionality; reveal that even a single collective identity can be rooted in multiple ways; and create family trees haunted by the queer others patrilineal genealogy seems to marginalize.

The roots narratives explored in this book simultaneously assert and question rooted identities within a number of diasporas—African, Jewish, and Armenian. By looking at these together, one can discern between the local specificities of any single diaspora and the commonalities inherent in diaspora as a global phenomenon. This comparatist, interdisciplinary study will interest scholars in a diversity of fields, including diaspora studies, postcolonial studies, LGBTQ studies, French and Francophone studies, American studies, comparative literature, and literary theory.

AUTHOR BIOGRAPHY
Jarrod Hayes is Professor of French Studies at Monash University, Australia.
TABLE OF CONTENTS
Contents
Introduction
1. Looking for Roots among the Mangroves
2. Queer Roots in Africa
3. Scandals and Lies: The Truth about Roots
4. From Roots That Uproot to Queer Diasporas
5. The Seduction of Roots and the Roots of Seduction
6. Booger Hollar and Other Queer Sites: Ghosts in the Family Tree
Notes
Works Cited
Index
REQUEST ACCESSIBLE FILE