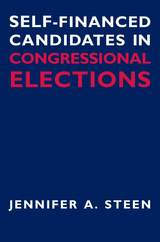 Are our elections for sale? Americans have long asked this question in the face of skyrocketing campaign spending by candidates and parties. Then, in the 1990s, came a wave of wealthy individuals whose deep pockets seemed to be buying political offices across the country. Our worst suspicions were confirmed. Or were they? What effect do self-financers really have on electoral outcomes? Jennifer Steen's authoritative empirical study of self-financed candidates is a landmark in American politics. Steen thoroughly dispels the notion that self-funded candidates can buy legislative seats, proving that the vast majority of self-financers do not win their elections. Her book gives us a truer understanding of self-financers' actual influence on campaign competition and rhetoric.

Jennifer A. Steen is Assistant Professor of Political Science at Boston College and a former political consultant. She is one of the nation's leading authorities on self-financed candidates.