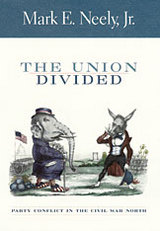 Pulitzer Prize-winning historian Mark E. Neely, Jr. vividly recounts the surprising story of political conflict in the North during the Civil War. Examining party conflict as viewed through the lens of the developing war, the excesses of party patronage, the impact of wartime elections, the highly partisan press, and the role of the loyal opposition, Neely deftly dismantles the argument long established in Civil War scholarship that the survival of the party system in the North contributed to its victory.
TABLE OF CONTENTS
Contents
Preface
Introduction
1. "No party now but all for our country": Political Parties and Public Safety
2. "Blustering treason in every assembly": The Revolt against Politics in 1863
3. "He must be entrenching": Political Parties and the Death of Strategy
4. "Odious to honourable men": The Press and Its Freedom in the Civil War
5. "Times of corruption and demoralization": The Futility of a Loyal Opposition
6. "Paroxysms of rage and fear": The Republican Party at War
7. The Civil War and the Two-Party System: A Reconsideration
Notes
Index