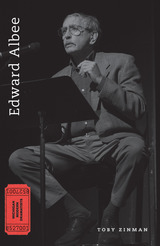 Edward Albee was a giant in American theater, in the same pantheon with Arthur Miller, Eugene O’Neill, and Tennessee Williams. His prolific career included three Pulitzer Prizes and the 2005 Lifetime Achievement Tony Award.

Albee continued producing major works for the theater into his eighties, including a prequel to The Zoo Story, which shocked the country when it first appeared in 1958—and his plays have seen major revivals on and off Broadway in recent years. Yet even with this resurgence of popularity, no up-to-date treatment of his plays is currently in print.

With engaging discussions of his most famous plays, such as Who’s Afraid of Virginia Woolf and Three Tall Women, as well as his lesser known works, this essential guide reveals the heart of Albee’s drama, highlighting the themes of sex, death, loneliness, and time that have occupied the playwright during his more than fifty years in the theater.

Toby Zinman is the theater critic for the Philadelphia Inquirer. She has written for numerous publications, including Variety,American Theater, and Theatre Journal. She is Professor of English at the University of the Arts, Philadelphia.