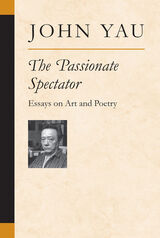 The Passionate Spectator collects essays, reviews, and art criticism by John Yau, an internationally lauded poet, critic, and curator. In this wide-ranging collection, Yau explores the intersection of art and poetry, dissolving boundaries between the artistic traditions and reimagining what it means to see and to write. Whether he is interpreting the poetic use of titles in Jessica Stockholder’s paintings, reviewing the collaborative book project between American poet Robert Creeley and German artist Georg Baselitz, or considering the significance of Frank O’Hara’s decision to have his portrait drawn wearing nothing but army boots, Yau is consistently daring, original, and contemporary.

Yau’s diverse critical sensibilities permeate The Passionate Spectator as he moves seamlessly between the visual and literary arts. Highlights of this collection include an essay on the poet as art critic, a study of the relationship between Kevin Young’s poetry and the paintings of Jean-Michel Basquiat, and an imaginative piece in which Yau speculates about what Jorge Luis Borges would have created had he been a visual artist. In the title essay, Yau lays out the duty of the spectator—a duty shared by viewer, reader, critic, and artist: “it is up to us to experience art, to engage and believe in its power.”
.
TABLE OF CONTENTS