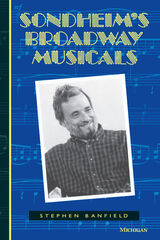 With thirteen Broadway musicals to his credit, Stephen Sondheim's career in the musical theater has outdistanced those of most of his contemporaries. Each of his shows has presented new challenges to audiences, and each has cast fresh perspectives on the nature and potential of the American musical, as well as probing deeply, often painfully, into the nature of our culture.
Sondheim's Broadway Musicals is the first book to take an in-depth look at Sondheim's work. Stephen Banfield examines each of Sondheim's musicals for Broadway, from West Side Story and Gypsy to the 1987 musical Into the Woods, and includes A Funny Thing Happened on the Way to the Forum, Company, Follies, Anyone Can Whistle, A Little Night Music, Pacific Overtures, Merrily We Roll Along, Sweeney Todd, and Sunday in the Park with George. Banfield also discusses Sondheim's other work, such as the 1991 show Assassins and his music for the 1990 film Dick Tracy--for which "Sooner or Later" won him an Academy Award for Best Song.
"Banfield seems almost to hear Sondheim's music with Sondheim's ears. This extremely valuable work discusses Sondheim's early training and subsequent career, his general compositional concerns, and his style. The meat of the book is a musical-dramatic analysis of his musicals . . . . For each musical, Banfield places the work and its components in a historical and typological text. He also treats in welcome detail the musical profile or universe of each show: Sondheim's use of generative intervals or interval complexes as source material, motifs that reappear in various guises in various songs, the sound world that defines the musical's emotional mind. The book will be as useful to those who are cool to Sondheim's work as to his fans." --Choice
REQUEST ACCESSIBLE FILE