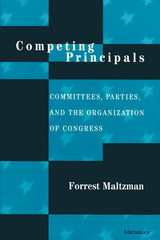 Since Woodrow Wilson, political scientists have recognized the importance of congressional committees in the policy-making process. Congressional committees often determine what legislation will reach the floor of the House or Senate and what form that legislation will take. In spite of the broad consensus on the importance of congressional committees, there is little agreement on what explains committee action. Committees are alternately viewed as agents of the chamber, the party caucuses, or constituencies outside the institution. Each theory suggests a different distribution of power in the policy-making process.
Forrest Maltzman argues that none of these models fully captures the role performed by congressional committees and that committee members attempt to balance the interests of the chamber, the party caucus, and outside constituencies. Over time, and with the changing importance of a committee's agenda to these groups, the responsiveness of members of committees will vary. Maltzman argues that the responsiveness of the committee to these groups is driven by changes in procedure, the strength of the party caucus, and the salience of a committee's agenda. Maltzman tests his theory against historical data.
This book will appeal to social scientists interested in the study of Congress and legislative bodies, as well as those interested in studying the impact of institutional structure on the policy-making process.
"This specialized study, of value to congressional scholars and partisan activists, enriches an understanding of the increasingly predictable patterns of committee variety." --Choice
Forrest Maltzman is Assistant Professor of Political Science, George Washington University.
REQUEST ACCESSIBLE FILE