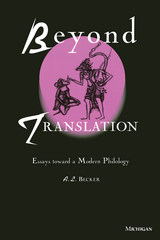 "This is not only a new philology but a new American linguistic philology. . . . Becker's harvest over a lifetime will be widely welcomed and respected." -Paul Friedrich, University of Chicago
". . . a book of extraordinary quality and importance." -James Boyd White, University of Michigan
How does Ralph Waldo Emerson sound in Kawi?
In this collection of essays A. L. Becker develops a new approach to translation he calls modern philology, an approach that insists, beyond translation, on the sorting out of ambiguities and contexts of meaning. Becker describes how texts in Burmese, Javanese, and Malay differ profoundly from English in all the ways they have meaning: in the games they play, the worlds they constitute, the memories they evoke, and the silences they maintain. In each of these dimensions there are excesses and inadequacies of meaning that make a difference across languages.
Drawn from over three decades of studying, teaching, translating and writing about Southeast Asian languages and literatures, the essays collected here for the first time are particular accounts of Becker's experiences in attempting to translate into or out of Burmese, Javanese, and Malay a variety of texts. They describe such things as the building of a Javanese shadowplay, how a Sanskrit story about the language of animals has been used in Indonesia, and some of the profound semantic silences a translator faces in taking an anecdote by Gregory Bateson from English into Malay.
In linguistics, the essays emphasize important kinds of nonuniversality in all aspects of language and look toward a new theory of language grounded in American pragmatism. In anthropology, the essays demonstrate that much of culture can be described in terms of text-building strategies. And for the comparativist, whether in literature, history, rhetoric, music, or psychology, the essays provide a new array of tools of comparison across distant languages and cultures.
A. L. Becker is Professor Emeritus of Linguistics and Anthropology, University of Michigan.
REQUEST ACCESSIBLE FILE