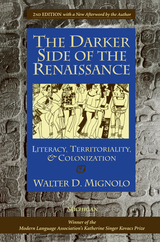 The Darker Side of the Renaissance: Literacy, Territoriality, & Colonization, 2nd Edition
by Walter Mignolo
University of Michigan Press, 2003
Paper: 978-0-472-08931-4
The Darker Side of the Renaissance weaves together literature, semiotics, history, historiography, cartography, and cultural theory to examine the role of language in the colonization of the New World. Exploring the many connections among writing, social organization, and political control, including how alphabetic writing is linked with the exercise of power, Walter D. Mignolo claims that European forms of literacy were at the heart of New World colonization. It has long been acknowledged that Amerindians were at a disadvantage in facing European invaders because native cultures did not employ the same kind of texts (hence "knowledge") that the Europeans valued. Yet no one but Mignolo has so thoroughly examined either the process or the implications of conquest and destruction through language. The book continues to challenge commonplace understandings of New World history and to stimulate new colonial and postcolonial scholarship.
Walter D. Mignolo is Professor in the Department of Romance Studies and the Program in Literature, Duke University.
REQUEST ACCESSIBLE FILE