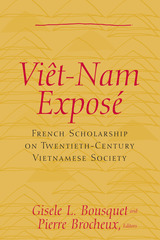 A collection of essays written on twentieth-century Vietnamese society, Viêt Nam Exposé is one of only a handful of books written by French scholars for an English-speaking audience. The volume is multidisciplinary and represents a new trend in Vietnamese studies that addresses issues beyond politics, wars, and violence, exploring the complexity of more subtle power relationships in Vietnamese society.
The book is divided into three parts. Part I, "Vietnamese Society in the Early Twentieth Century," takes a micro approach to the study of Vietnamese society on the eve of the irreversible social transformation that occurred as the colonial infrastructure took root in Indochina. Part II, "Vietnamese Intellectuals: Contesting Colonial Power," contains biographical accounts of Vietnamese intellectuals who tried to reform their society under colonial domination. Part III, "Post-Colonial Vietnam: From Welfare State to Market-Oriented Economy," traces Vietnam's search for a viable economic model while maintaining itself as a socialist state.
The book speaks to diverse themes, including the nature of village life, the development of health care during the colonial era, the status of women, the role of Vietnamese intellectuals in the anticolonial struggle, the building of a socialist state, contemporary rural migration, labor relations, and Vietnam in an age of globalization.
Gisele Bousquet is Research Associate at the Center for Southeast Asian Studies, University of California, Berkeley. Pierre Brocheux is Maître de Conference of History, Université Denis Diderot-Paris VII.
REQUEST ACCESSIBLE FILE