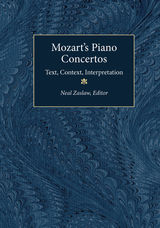 Mozart's Piano Concertos: Text, Context, Interpretation
edited by Neal Zaslaw
University of Michigan Press, 1997
Cloth: 978-0-472-10314-0
Like the symphonies of Beethoven, Mozart's piano concertos constitute an extraordinary body of work that will never disappear from our culture. Yet despite widespread recognition of their importance, they still present many interpretive problems. In 1989, the Michigan MozartFest brought expert performers, instrument makers, critics, music theorists, and musicologists together for the first symposium devoted exclusively to Mozart's piano concertos. The twenty-one essays in Mozart's Piano Concertos, culled from that event, richly broaden our understanding of this corpus.
The volume's first section consists of commentaries on the texts of the concertos, including thoughts on creating a critical edition. In subsequent sections, contributors analyze the structure of the pieces and the circumstances in which they were first composed and performed. How do these works compare with other concertos of the period? Where were Mozart's contributions truly original, where conventional? What musical references did he expect his listeners to catch?
Generously illustrated with facsimiles, tables, and more than one-hundred musical examples, Mozart's Piano Concertos substantially advances our understanding of these wonderful works. Its exceptional scope--addressing everything from textual problems (what notes should be played?) to performance practice (how can we make the music sound more nearly as Mozart heard it?)--will make it invaluable to anyone who loves his piano concertos.
Contributors:
V. Kofi Agawu, Wye Jameson Allanbrook, Eva Badura-Skoda, Karol Berger, Richard Crawford, Ellwood Derr, Dexter Edge, Cliff Eisen, Martha Feldman, David Grayson, William Kinderman, Robert D. Levin, Janet M. Levy, David Rosen, Carl Schachter, Elaine Sisman, Jane R. Stevens, Alan Tyson, James Webster, Christoph Wolff, and Neal Zaslaw.
Neal Zaslaw is Professor of Music, Cornell University.
REQUEST ACCESSIBLE FILE