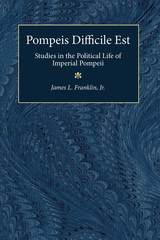 Pompeis Difficile Est: Studies in the Political Life of Imperial Pompeii
by James Lee (Jr.) Franklin
University of Michigan Press, 2001
Cloth: 978-0-472-11056-8
In describing the intensity of political life in ancient Pompeii, Cicero remarks, "at Pompeii it's difficult" (Pompeis difficile est). Drawing on thousands of fragmentary writings--campaign posters, graffiti, inscriptions, and business receipts--recovered in the excavations of lava- and mud-covered Pompeii, James L. Franklin assembles evidence from the eras of emperors Augustus through Vespasian to prove the validity of Cicero's statement.
By collecting, sifting, and cross-referencing these varied documents, Franklin proves it possible to trace the major political alliances of the times, explore the remains of their houses, and find traces of their personalities. A few families, like the powerful Holconii, developers of the region's most famous grape vine, prove to have been steady players throughout Pompeii's history; but most families rose and fell within two generations at most. Chapters examine the men and families most prominent in each imperial period, including an analysis of their houses, and concludes with family trees. The documents themselves, elsewhere difficult to access, are prominently featured and translated in the text, making these discussions available and vivid to all readers.
This book is the first such attempt to cross-reference and animate all kinds of writing found at this legendary site. Outside of the city of Rome itself, this is the largest collection of writing from Roman antiquity, and it has lain mostly unexamined in the course of three centuries of excavations at Pompeii. This volume will interest not only students of Pompeii and classical scholars, but also historians, political scientists, sociologists, and enthusiasts of human behavior of all eras.
James L. Franklin is Professor of Classical Studies, Indiana University.
TABLE OF CONTENTS