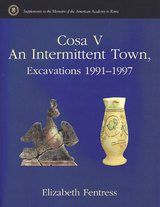 Since excavation began in 1948, the site of Cosa has become one of our most important sources on Roman colonization, urbanism, and daily life. These excavations illuminate every phase of the site's history, from the Republican and early imperial period, to a medieval castle destroyed in the 14th century.
This book includes a narrative account of the history of the town seen in the light of the excavations, as well as the publication of all the medieval finds from the site. Illustrated with 150 figures and plates, including numerous reconstruction drawings and an important sequence of Roman pottery, it will be useful to all those interested in Roman and Medieval archaeology and history.
An innovative aspect of this publication is the simultaneous web publication of the site's stratigraphy. In this manner, the detailed site information will be available to specialists and those of the general public who closely follow new directions in Roman archaeology.
Elizabeth Fentress is an independent scholar and archaeologist working in Rome. She served as Mellon Professor at the American Academy in Rome between 1996 and 1999.