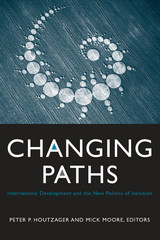 After two decades of marketizing, an array of national and international actors have become concerned with growing global inequality, the failure to reduce the numbers of very poor people in the world, and a perceived global backlash against international economic institutions. This new concern with poverty reduction and the political participation of excluded groups has set the stage for a new politics of inclusion within nations and in the international arena. The essays in this volume explore what forms the new politics of inclusion can take in low- and middle-income countries. The contributors favor a polity-centered approach that focuses on the political capacities of social and state actors to negotiate large-scale collective solutions and that highlights various possible strategies to lift large numbers of people out of poverty and political subordination.
The contributors suggest there is little basis for the radical polycentrism that colors so much contemporary development thought. They focus on how the political capabilities of different societal and state actors develop over time and how their development is influenced by state action and a variety of institutional and other factors. The final chapter draws insightful conclusions about the political limitations and opportunities presented by current international discourse on poverty.
Peter P. Houtzager is a Fellow at the Institute of Development Studies, University of Sussex. He has been a visiting scholar at the Center for Latin American Studies, University of California, Berkeley, visiting lecturer at Stanford University, and lecturer at St. Mary's College. A political scientist with broad training in comparative politics and historical-institutional analysis, he has written extensively on the institutional roots of collective action.
Mick Moore is a Fellow at the Institute of Development Studies, University of Sussex, as well as Director of the Centre for the Future State. He has been a visiting professor at the Massachusetts Institute of Technology. His professional interests include political and institutional aspects of poverty reduction and of economic policy and performance, the politics and administration of development, and good government.
TABLE OF CONTENTS
List of Tables
Acknowledgments
1 Introduction: From Polycentrism to the Polity
2 Political Capabilities over the Long Run
3 Beyond the Political Impossibility Theorem of Agrarian Reform
4 Coalition Building from Below
5 Grounds for Alliance?: Overlapping Interests of Poor and Not so Poor
6 The Boundaries of Antipoverty Policy: Economic Ideas, Political Coalitions, and the Structure of Social Provisions in Chile and Mexico
7 Polity Qualities: How Governance Afflicts Poverty
8 Do Political Regimes Matter?: Poverty Reduction And Regime Differences Across India
9 Does Decentralization Contribute to Poverty Reduction?: Surveying the Evidence
10 Arguing the Politics of Inclusion
Contributors
Subject Index
Author Index
REQUEST ACCESSIBLE FILE