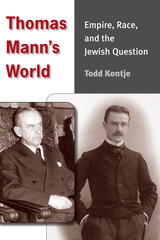 ". . . a refreshing example of what literary discourse can teach us about national identity, even historical events and trends---those aspects of a nation's evolving heritage and tradition usually reserved for other disciplines."
---Colloquia Germanica

"Kontje has pulled off the amazing feat of a grand narrative: from the epic literature of the Middle Ages to very recent texts on the emerging multicultural Germany. Kontje's grand narrative, it should be noted, is not at all simplistic or reductionistic. He gets at the individual texts in complex ways . . . he displays an enviable erudition and scholarship, tracing lines through centuries when most scholars today limit themselves to narrow specialties."
---Russell Berman, Stanford University

Exactly how Thomas Mann's significance registers with the scholarly and general public has been subject to change. For many, Mann retains the aura of the "good German," the Nobel Laureate who was the most vocal leader of the exile community against Hitler and the Third Reich. His diaries, however, contain some rather nasty comments about Mann's many Jewish friends and acquaintances, inspiring a renewed look at the negative Jewish stereotypes in his fiction. The man once venerated as a voice of reason and cosmopolitan tolerance against racist bigotry has been eviscerated as a clandestine anti-Semite.

Thomas Mann's World is a comprehensive reevaluation of Mann as the representative German author of the Age of Empire, placing Mann's comments about Jews and the Jewish characters in his fiction in the larger context of his attentiveness to racial difference, both in the world at large and in himself. Kontje argues that Mann is a worldly author---not in the benign sense that he was an eloquent spokesman for a pan-European cosmopolitanism who had witnessed the evils of nationalism gone mad, although he was that, too---but in the sense of a writer whose personal prejudices reflected those of the world around him, a writer whose deeply autobiographical fiction expressed not only the concerns of the German nation, as he liked to claim, but also of the world in an era of imperial conquest and global conflict.

Todd Kontje is Professor of German and Comparative Literature and Chair of the German Department at the University of California, San Diego. He is the author of German Orientalisms (University of Michigan Press, 2004).

"A comprehensive and judicious study, which would examine Mann's representations of race and gender as a whole and with some measure of sympathy, has been badly needed. Todd Kontje deserves gratitude for providing such a study…. It can be enthusiastically recommended."
—Modern Language Review