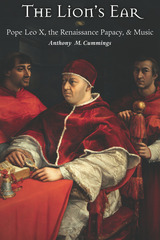 For centuries, the Renaissance papacy has been celebrated for its generous patronage of the arts. Pope Leo X, son of the legendary Lorenzo "the Magnificent" de'Medici, is widely understood to be one of the greatest patrons of music in European history, and one of the emblematic figures of the Italian Renaissance.

The Lion's Ear is the first full-length scholarly treatment of the musical patronage of a Renaissance pope and provides an evocative picture of the musical life of the pre-Reformation papacy. The various uses of music in early modern Rome---music for public festivals, such as carnival; for the liturgical ceremonies of the Sistine Chapel; to accompany daily dining and festive banqueting; for the celebration of saints' feast days; and for theatrical performances---are vividly described and analyzed and give a detailed understanding of the place of music in the life of one of its most important early modern benefactors.

Anthony M. Cummings takes an interdisciplinary approach to his subject matter, bringing together the history of music, art, philosophy, and ecclesiastical history to locate the music in its broadest and deepest contexts. Through materials such as diplomatic correspondence, the book aims to reconstruct the atmosphere of the musical life in Leo X's court, presenting the subject matter in a way that will appeal to scholars and students of musicology and early modern history.

Art historians, ecclesiastical historians, and specialists from many other disciplines have long produced scholarly findings useful for understanding the pre-Reformation papacy, its alliance with the Italian Renaissance, and the extraordinary artistic legacy of that alliance. Anthony M. Cummings complements that scholarship with his thorough and imaginative account of music's relationship with that vibrant and fascinating culture, the first by a specialist in the musical life of early modern Europe.

"An excellent overall presentation of this historical figure and his effect on the arts during the transitional period of the early Reformation."
—B. L. Eden, Valparaiso University, Choice