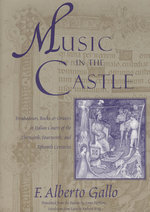 Written by one of Italy's most eminent scholars of music, this book explores music's place in the cultural, artistic, and literary life of medieval Italian courts, paying particular attention to the influence of French culture on Italian artistic and musical traditions.

In the first of three elegant essays, Gallo examines the troubadours who traveled to northern Italian courts from Provence during the thirteenth century. He discusses their performance practices, the verbal and musical sophistication of their songs, and their role in the daily life of courtiers at Genoa, Ferrara, and Monferrato. The second essay concerns the now dispersed collection of the Visconti library at Pavia. Here, Gallo examines how this collection expressed the tastes of the fourteenth-century court of Giangaleazzo Visconti, how French arts were imported and imitated at Pavia, and the effects this had on music heard at the court. In the final essay, Gallo looks at the fifteenth-century tradition of improvised music, and especially the virtuoso lute player Pietrobono. Mythologized in literary circles of his day, Pietrobono becomes a point of departure for a discussion of the entire vision of music of Italian humanists, from Guarino Veronese to Aurelio Brandolini.
TABLE OF CONTENTS