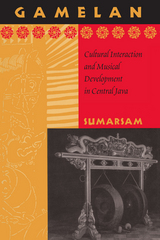 Gamelan is the first study of the music of Java and the development of the gamelan to take into account extensive historical sources and contemporary cultural theory and criticism. An ensemble dominated by bronze percussion instruments that dates back to the twelfth century in Java, the gamelan as a musical organization and a genre of performance reflects a cultural heritage that is the product of centuries of interaction between Hindu, Islamic, European, Chinese, and Malay cultural forces.

Drawing on sources ranging from a twelfth-century royal poem to the writing of a twentieth-century nationalist, Sumarsam shows how the Indian-inspired contexts and ideology of the Javanese performing arts were first adjusted to the Sufi tradition and later shaped by European performance styles in the eighteenth and nineteenth centuries. He then turns to accounts of gamelan theory and practice from the colonial and postcolonial periods. Finally, he presents his own theory of gamelan, stressing the relationship between purely vocal melodies and classical gamelan composition.
TABLE OF CONTENTS