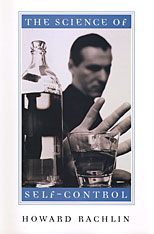 This book proposes a new science of self-control based on the principles of behavioral psychology and economics. Claiming that insight and self-knowledge are insufficient for controlling one's behavior, Howard Rachlin argues that the only way to achieve such control--and ultimately happiness--is through the development of harmonious patterns of behavior. Most personal problems with self-control arise because people have difficulty delaying immediate gratification for a better future reward. To avoid those problems, the author presents a strategy of "soft commitment," consisting of the development of valuable patterns of behavior that bridge over individual temptations.
TABLE OF CONTENTS
Contents
Introduction
1. Habit and Willpower
2. Simple Ambivalence
3. Complex Ambivalence
4. The Lonely Addict
5. Soft Commitment
6. Rules and Probability
7. Self-Control and Social Cooperation
Notes
References
Index