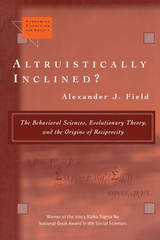 Altruistically Inclined? examines the implications of recent research in the natural sciences for two important social scientific approaches to individual behavior: the economic/rational choice approach and the sociological/anthropological. It considers jointly two controversial and related ideas: the operation of group selection within early human evolutionary processes and the likelihood of modularity—domain-specific adaptations in our cognitive mechanisms and behavioral predispositions.

Experimental research shows that people will often cooperate in one-shot prisoner's dilemma (PD) games and reject positive offers in ultimatum games, contradicting commonly accepted notions of rationality. Upon first appearance, predispositions to behave in this fashion could not have been favored by natural selection operating only at the level of the individual organism.

Emphasizing universal and variable features of human culture, developing research on how the brain functions, and refinements of thinking about levels of selection in evolutionary processes, Alexander J. Field argues that humans are born with the rudiments of a PD solution module—and differentially prepared to learn norms supportive of it. His emphasis on failure to harm, as opposed to the provision of affirmative assistance, as the empirically dominant form of altruistic behavior is also novel.

The point of departure and principal point of reference is economics. But Altruistically Inclined? will interest a broad range of scholars in the social and behavioral sciences, natural scientists concerned with the implications of research and debates within their fields for the conduct of work elsewhere, and educated lay readers curious about essential features of human nature.