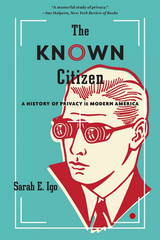 Every day, we make decisions about what to share and when, how much to expose and to whom. Securing the boundary between one’s private affairs and public identity has become an urgent task of modern life. How did privacy come to loom so large in public consciousness? Sarah Igo tracks the quest for privacy from the invention of the telegraph onward, revealing enduring debates over how Americans would—and should—be known. The Known Citizen is a penetrating historical investigation with powerful lessons for our own times, when corporations, government agencies, and data miners are tracking our every move.

“A mighty effort to tell the story of modern America as a story of anxieties about privacy…Shows us that although we may feel that the threat to privacy today is unprecedented, every generation has felt that way since the introduction of the postcard.”
—Louis Menand, New Yorker

“Engaging and wide-ranging…Igo’s analysis of state surveillance from the New Deal through Watergate is remarkably thorough and insightful.”
—The Nation
TABLE OF CONTENTS
Cover
Title Page
Copyright
Dedication
Contents
Introduction
1. Technologies of Publicity
2. Documents of Identity
3. The Porous Psyche
4. A Right to Be Let Alone
5. Codes of Confidentiality and Consent
6. The Record Prison
7. The Ethic of Transparency
8. Stories of One’s Self
Conclusion
Notes
Acknowledgments
Credits
Index