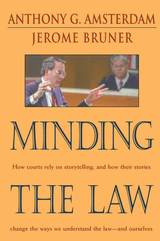 In this remarkable collaboration, one of the nation's leading civil rights lawyers joins forces with one of the world's foremost cultural psychologists to put American constitutional law into an American cultural context. By close readings of key Supreme Court opinions, they show how storytelling tactics and deeply rooted mythic structures shape the Court's decisions about race, family law, and the death penalty.

Minding the Law explores crucial psychological processes involved in the work of lawyers and judges: deciding whether particular cases fit within a legal rule ("categorizing"), telling stories to justify one's claims or undercut those of an adversary ("narrative"), and tailoring one's language to be persuasive without appearing partisan ("rhetorics"). Because these processes are not unique to the law, courts' decisions cannot rest solely upon legal logic but must also depend vitally upon the underlying culture's storehouse of familiar tales of heroes and villains.

But a culture's stock of stories is not changeless.

Amsterdam and Bruner argue that culture itself is a dialectic constantly in progress, a conflict between the established canon and newly imagined "possible worlds." They illustrate the swings of this dialectic by a masterly analysis of the Supreme Court's race-discrimination decisions during the past century.

A passionate plea for heightened consciousness about the way law is practiced and made, Minding the Law will be welcomed by a new generation concerned with renewing law's commitment to a humane justice.

1. Invitation to a Journey
2. On Categories
3. Categorizing at the Supreme Court Missouri v. Jenkins and Michael H. v. Gerald D.
4. On Narrative
5. Narratives at Court Prigg v. Pennsylvania and Freeman v. Pitts
6. On Rhetorics
7. The Rhetorics of Death McCleskey v. Kemp
8. On the Dialectic of Culture
9. Race, the Court, and America's Dialectic From Plessy through Brown to Pitts and Jenkins
10. Reflections on a Voyage

Appendix: Analysis of Nouns and Verbs in the Prigg, Pitts, and Brown Opinions
Notes
Table of Cases
Index

Reviews of this book:
Amsterdam, a distinguished Supreme Court litigator, wanted to do more than share the fruits of his practical experience. He also wanted to...get students to think about thinking like a lawyer...To decode what he calls "law-think," he enlisted the aid of the venerable cognitive psychologist Jerome Bruner...[and] the collaboration has resulted in [this] unusual book.
--James Ryerson, Lingua Franca

Reviews of this book:
It is hard to imagine a better time for the publication of Minding the Law, a brilliant dissection of the court's work by two eminent scholars, law professor Anthony G. Amsterdam and cultural anthropologist Jerome Bruner...Issue by issue, case by case, Amsterdam and Bruner make mincemeat of the court's handling of the most important constitutional issue of the modern era: how to eradicate the American legacy of race discrimination, especially against blacks.
--Edward Lazarus, Los Angeles Times Book Review

Reviews of this book:
This book is a gem...[Its thesis] is easily stated but remarkably unrecognized among a shockingly large number of lawyers and law professors: law is a storytelling enterprise thoroughly entrenched in culture....Whereas critical legal theorists have talked among themselves for the past two decades, Amsterdam and Bruner seek to engage all of us in a dialogue. For that, they should be applauded.
--Daniel R. Williams, New York Law Journal

Reviews of this book:
In Minding the Law, Anthony Amsterdam and Jerome Bruner show us how the Supreme Court creates the magic of inevitability. They are angry at what they see. Their book is premised on the conviction that many of the choices made in Supreme Court opinions 'lack any justification in the text'...Their method is to analyze the text of opinions and to show how the conclusions reached do not always follow from the logic of the argument. They also show how the Court casts its rhetoric like a spell, mesmerizing its audience, and making the highly contingent shine with the light of inevitability.
--Mitchell Goodman, News and Observer (Raleigh, North Carolina)

Reviews of this book:
What do controversial Supreme Court decisions and classic age-old tales of adultery, villainy, and combat have in common? Everything--at least in the eyes of [Amsterdam and Bruner]. In this substantial study, which is equal parts dense and entertaining, the authors use theoretical discussions of literary technique and myths to expose what they see as the secret intentions of Supreme Court opinions...Studying how lawyers and judges employ the various literary devices at their disposal and noting the similarities between legal thinking and classic tactics of storytelling and persuasion, they believe, can have 'astonishing consciousness-retrieving effects'...The agile minds of Amsterdam and Bruner, clearly storehouses of knowledge on a range of subjects, allow an approach that might sound far-fetched occasionally but pays dividends in the form of gained perspective--and amusement.
--Elisabeth Lasch-Quinn, Washington Times

Reviews of this book:
Stories and the way judges-intentionally or not-categorize and spin them, are as responsible for legal rulings as logic and precedent, Mr. Amsterdam and Mr. Bruner said. Their novel attempt to reach into the psyche of...members of the Supreme Court is part of a growing interest in a long-neglected and cryptic subject: the psychology of judicial decision-making.
--Patricia Cohen, New York Times

Most law professors teach by the 'case method,' or say they do. In this fascinating book, Anthony Amsterdam--a lawyer--and Jerome Bruner--a psychologist--expose how limited most case 'analysis' really is, as they show how much can be learned through the close reading of the phrases, sentences, and paragraphs that constitute an opinion (or other pieces of legal writing). Reading this book will undoubtedly make one a better lawyer, and teacher of lawyers. But the book's value and interest goes far beyond the legal profession, as it analyzes the way that rhetoric--in law, politics, and beyond--creates pictures and convictions in the minds of readers and listeners.
--Sanford Levinson, author of Constitutional Faith

Tony Amsterdam, the leader in the legal campaign against the death penalty, and Jerome Bruner, who has struggled for equal justice in education for forty years, have written a guide to demystifying legal reasoning. With clarity, wit, and immense learning, they reveal the semantic tricks lawyers and judges sometimes use--consciously and unconsciously--to justify the results they want to reach.
--Jack Greenberg, Professor of Law, Columbia Law School
TABLE OF CONTENTS
Contents
1 Invitation to a Journey
2 On Categories
3 Categorizing at the Supreme Court: Missouri v. Jenkins and Michael H. v. Gerald D.
4 On Narrative
5 Narratives at Court: Prigg v. Pennsylvania and Freeman v. Pitts
6 On Rhetorics
7 The Rhetorics of Death: McCleskey v. Kemp
8 On the Dialectic of Culture
9 Race, the Court, and America’s Dialectic: From Plessy through Brown to Pitts and Jenkins
10 Reflections on a Voyage
Appendix: Analysis of Nouns and Verbs in the Prigg, Pitts, and Brown Opinions
Notes
Table of Cases
Index