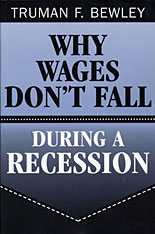 A deep question in economics is why wages and salaries don't fall during recessions. This is not true of other prices, which adjust relatively quickly to reflect changes in demand and supply. Although economists have posited many theories to account for wage rigidity, none is satisfactory. Eschewing "top-down" theorizing, Truman Bewley explored the puzzle by interviewing--during the recession of the early 1990s--over three hundred business executives and labor leaders as well as professional recruiters and advisors to the unemployed. By taking this approach, gaining the confidence of his interlocutors and asking them detailed questions in a nonstructured way, he was able to uncover empirically the circumstances that give rise to wage rigidity. He found that the executives were averse to cutting wages of either current employees or new hires, even during the economic downturn when demand for their products fell sharply. They believed that cutting wages would hurt morale, which they felt was critical in gaining the cooperation of their employees and in convincing them to internalize the managers' objectives for the company. Bewley's findings contradict most theories of wage rigidity and provide fascinating insights into the problems businesses face that prevent labor markets from clearing.

Reviews of this book:
In Why Wages Don't Fall During A Recession, [Truman Bewley] tackles one of the oldest, and most controversial, puzzles in economics: why nominal wages rarely fall (and real wages do not fall enough) when unemployment is high. But he does so in a novel way, through interviews with over 300 businessmen, union leaders, job recruiters and unemployment counsellors in the north-eastern United States during the early 1990s recession...Mr. Bewley concludes that employers resist pay cuts largely because the savings from lower wages are usually outweighed by the cost of denting workers' morale: pay cuts hit workers' standard of living and lower their self-esteem. Falling morale raises staff turnover and reduces productivity...Mr. Bewley's theory has some interesting implications...[and] has a ring of truth to it.
--The Economist

Reviews of this book:
This contribution to the growing literature on behavioral macroeconomics threatens to disturb the tranquil state of macroeconomic theory that has prevailed in recent years...Bewley's argument will be hard for conventional macroeconomists to ignore, partly because of the extraordinary thoroughness and honesty with which he evidently conducted his investigation, and the sheer volume of evidence he provides...Although Bewley's work will not settle the substantive debates related to wage rigidity, it is likely to have a profound influence on the way macroeconomists construct models. In particular, the concepts of morale, fairness, and money illusion are almost certain to play a big role in macroeconomic theory. His demonstration that there exist in reality simple, robust behavioral patters that cannot plausibly be founded on traditional maximizing behabior also raises the prospect of a more empirically oriented, more behavioral macroeconomics in the future.
--Peter Howitt, journal of Economic Literature

Reviews of this book:
I think any scholar interested in labour markets and wage determination should read this well-written, lively, and highly stimulating book...[It] provides a fresh view and a lot of complementary background knowledge about how experienced people in the field see the employment relationship and what is actually crucial. Knowledge of this sort is all too rare in economics, and Truman Bewley's truly impressive study can serve as a role model for future investigations.
--Simon G'chter, Journal of Institutional and Theoretical Economics

To call this book a breath of fresh air is an understatement. The direct insights are fascinating, and Truman Bewley's use of them is sharp and insightful. Labor economists and macroeconomists have a lot to think about.
--Robert M. Solow, Nobel Laureate, Institute Professor of Economics, Emeritus, Massachusetts Institute of Technology