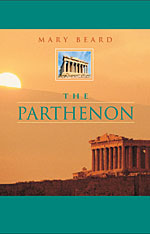 Oscar Wilde compared it to a white goddess, Evelyn Waugh to Stilton cheese. In observers from Lord Byron to Sigmund Freud to Virginia Woolf it met with astonishment, rapture, poetry, even tears--and, always, recognition. Twenty-five hundred years after it first rose above Athens, the Parthenon remains one of the wonders of the world, its beginnings and strange turns of fortune over millennia a perpetual source of curiosity, controversy, and intrigue.

At once an entrancing cultural history and a congenial guide for tourists, armchair travelers, and amateur archaeologists alike, this book conducts readers through the storied past and towering presence of the most famous building in the world. Who built the Parthenon, and for what purpose? How are we to understand its sculpture? Why is it such a compelling monument? The classicist and historian Mary Beard takes us back to the fifth century B.C. to consider the Parthenon in its original guise--as the flagship temple of imperial Athens, housing an enormous gold and ivory statue of the city's patron goddess attended by an enigmatic assembly of sculptures. Just as fascinating is the monument's far longer life as cathedral church of Our Lady of Athens, as "the finest mosque in the world," and, finally, as an inspirational ruin and icon. Beard also takes a cool look at the bitter arguments that continue to surround the "Elgin Marbles," the sculptures from the Parthenon now in the British Museum. Her book constitutes the ultimate tour of the marvelous history and present state of this glory of the Acropolis, and of the world.

2. 'The temple they call the Parthenon'

3. 'The finest Mosque in the world'

4. 'From ruin to reconstruction


Reviews of this book:
Wry and imaginative, this gem of a book deconstructs the most famous building in Western history. Beard, probably Britain's best-known classicist, elucidates...the history of the ancient building, the functions--church, mosque, barracks, ammunition dump--it has served since antiquity, and the place it has held in the European imagination in the modern era. With ÃƒÂ©clat she dashes most of what we think we know about the ancient Greeks' building: the iconic image of the Parthenon held today is the product of a terribly inaccurate reconstruction in the 1920s, a reconstruction now being painstakingly undone...Beard reveals just how alien...the classical Greeks are to us, and just how little we know about them.
--Benjamin Schwarz, Atlantic Monthly

Reviews of this book:
With painstaking attention to detail and a fair-minded view of centuries-old controversies, Mary Beard delivers a brief, but thorough, and surprisingly readable history of what is arguably the world's most famous building...Beard pieces together what we do know, beginning with the earliest surviving account...[She] does a fine job of storytelling...describing changes on the site from a modern tourist's perspective.
--Stephen H. Morgan, Boston Globe

Reviews of this book:
In her brief but compendious volume [Beard] says that the more we find out about this mysterious structure, the less we know. Her book is especially valuable because it is up to date on the restoration the Parthenon has been undergoing since 1986.
--Gary Wills, New York Review of Books