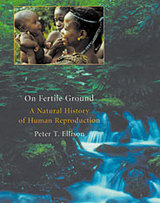 Reproduction is among the most basic of human biological functions, both for our distant ancestors and for ourselves, whether we live on the plains of Africa or in North American suburbs. Our reproductive biology unites us as a species, but it has also been an important engine of our evolution. In the way our bodies function today we can see both the imprint of our formative past and implications for our future. It is the infinitely subtle and endlessly dramatic story of human reproduction and its evolutionary context that Peter T. Ellison tells in On Fertile Ground.

Ranging from the latest achievements of modern fertility clinics to the lives of subsistence farmers in the rain forests of Africa, this book offers both a remarkably broad and a minutely detailed exploration of human reproduction. Ellison, a leading pioneer in the field, combines the perspectives of anthropology, stressing the range and variation of human experience; ecology, sensitive to the two-way interactions between humans and their environments; and evolutionary biology, emphasizing a functional understanding of human reproductive biology and its role in our evolutionary history.

Whether contrasting female athletes missing their periods and male athletes using anabolic steroids with Polish farm women and hunter-gatherers in Paraguay, or exploring the intricate choreography of an implanting embryo or of a nursing mother and her child, On Fertile Ground advances a rich and deeply satisfying explanation of the mechanisms by which we reproduce and the evolutionary forces behind their design.
TABLE OF CONTENTS
Contents
Two Births
Surviving the First Cut
A Time to Be Born
The Elixir of Life
Why Grow Up?
Balancing Act
The Arc of Life
The Body Builders
The Journey and the Procession
Notes
Acknowledgments
List of Illustrations
Index