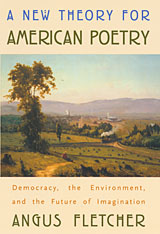 "Amid gloomy forecasts of the decline of the humanities and the death of poetry, Angus Fletcher, a wise and dedicated literary voice, sounds a note of powerful, tempered optimism. He lays out a fresh approach to American poetry at large, the first in several decades, expounding a defense of the art that will resonate well into the new century.

Breaking with the tired habit of treating American poets as the happy or rebellious children of European romanticism, Fletcher uncovers a distinct lineage for American poetry. His point of departure is the fascinating English writer, John Clare; he then centers on the radically American vision expressed by Emerson and Walt Whitman. With Whitman this book insists that ""the whole theory and nature of poetry"" needs inspiration from science if it is to achieve a truly democratic vista. Drawing variously on Complexity Theory and on fundamentals of art and grammar, Fletcher argues that our finest poetry is nature-based, environmentally shaped, and descriptive in aim, enabling poets like John Ashbery and other contemporaries to discover a mysterious pragmatism.

Intense, resonant, and deeply literary, this account of an American poetics shows how today's consumerist and conformist culture subverts the imagination of a free people. While centering on American vision, the argument extends our horizon, striking a blow against all economically sanctioned attacks upon the finer, stronger human capacities. Poetry, the author maintains, is central to any coherent vision of life. "
TABLE OF CONTENTS
Contents
Introduction
1. Clare’s Horizon
2. The Argument of Form
3. Description
4. Ashbery’s Clare
5. Diurnal Knowledge
6. The Whitman Phrase
7. The Environment-Poem
8. Waves and the Troping of Poetic Form
9. Middle Voice
10. Ashbery and the Becoming of the Poem
11. Meditating Chaos and Complexity
12. “The Long Amazing and Unprecedented Way”
13. Coherence
14. Precious Idiosyncrasy: An Epilogue
Notes
Index