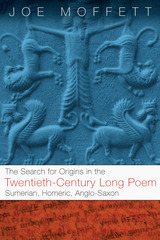 In this new, scholarly text—an ambitious study of contemporary poetics—Joe W. Moffett deciphers the twentieth-century long poem, searching for a better understanding of why long-poem writers are preoccupied with a search for origins.

Moffett focuses on issues like postcolonialism, nation, modernism, and postmodernism. He conceptualizes his theories by using what he calls “originiary moments”: historical periods or specific events from which a poet contends our culture descends. These moments enlighten and inspire the modern poet to use origin or “source” as a way to examine present culture and social conditions. The poems also encourage modern readers to question, revise, and repudiate. Moffett organizes his argument by arranging specific examples into three categories of originary moments: Sumerian, Homeric, and Anglo-Saxon.

According to Moffett, the long poem is appealing because it “lacks strict conventions that govern other genres.” Using a wide variety of poems to support his arguments, Moffett asks many stimulating questions and also provides provocative answers.

Questions of when and where It All Began have been off the critical agenda for some time now, embargoed by poststructuralism. Undeterred, Joe Moffett boldly revisits the search for cultural origins, which preoccupied major poets throughout the twentieth century. Capacious in his scope, eclectic in his choices, Moffett rounds up unusual subjects, including long poems by Armand Schwerner, Derek Walcott, Geoffrey Hill, and Judy Grahn, with excursions into Charles Olson, Seamus Heaney, and others. Nowhere will you find clearer, more intelligent, or better-informed readings of these poems than Moffett’s.


•"Returning to the Origin and Bringing Something Back" in the Twentieth-Century Long Poem
•Charles Olson's The Maximus Poems and Armand Shwerner's The Tablets: From Late Modernist to Postmodernist Long Poem
•"Master, I Was the Freshest of All Your Readers": Postcolonialism and Postmodern Self-Reflexivity in Derek Walcott's Omeros
•Narrating the Origins of the Nation: Geoffrey Hill's Mercian Hymns and "An Appology for the Revival of Christian Architecture in England"
•"A New Myth of Origin": Judy Grahn's A Chronicle of Queens and Popular culture
•Conclusions: Origins and the Modern/Postmodern Divide
•Bibliography
•Index