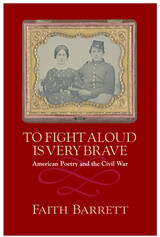 Focusing on literary and popular poets, as well as work by women, African Americans, and soldiers, this book considers how writers used poetry to articulate their relationships to family, community, and nation during the Civil War. Faith Barrett suggests that the nationalist “we” and the personal “I” are not opposed in this era; rather they are related positions on a continuous spectrum of potential stances. For example, while Julia Ward Howe became famous for her “Battle Hymn of the Republic,” in an earlier poem titled “The Lyric I” she struggles to negotiate her relationship to domestic, aesthetic, and political stances. Barrett makes the case that Americans on both sides of the struggle believed that poetry had an important role to play in defining national identity. She considers how poets created a platform from which they could speak both to their own families and local communities and to the nations of the Confederacy, the Union, and the United States. She argues that the Civil War changed the way American poets addressed their audiences and that Civil War poetry changed the way Americans understood their relationship to the nation.
AUTHOR BIOGRAPHY
Faith Barrett is associate professor and chair of English at Lawrence University. She is coeditor of “Words for the Hour”: A New Anthology of American Civil War Poetry (University of Massachusetts Press, 2005). You can read an interview of Prof. Barrett at www.poetryfoundation.org/article/244826