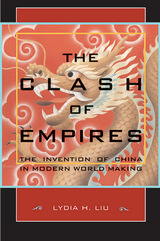 What is lost in translation may be a war, a world, a way of life. A unique look into the nineteenth-century clash of empires from both sides of the earthshaking encounter, this book reveals the connections between international law, modern warfare, and comparative grammar--and their influence on the shaping of the modern world in Eastern and Western terms.

The Clash of Empires brings to light the cultural legacy of sovereign thinking that emerged in the course of the violent meetings between the British Empire and the Qing Dynasty (1644-1911). Lydia Liu demonstrates how the collision of imperial will and competing interests, rather than the civilizational attributes of existing nations and cultures, led to the invention of "China," "the East," "the West," and the modern notion of "the world" in recent history. Drawing on her archival research and comparative analyses of English--and Chinese--language texts, as well as their respective translations, she explores how the rhetoric of barbarity and civilization, friend and enemy, and discourses on sovereign rights, injury, and dignity were a central part of British imperial warfare. Exposing the military and philological--and almost always translingual--nature of the clash of empires, this book provides a startlingly new interpretation of modern imperial history.
TABLE OF CONTENTS