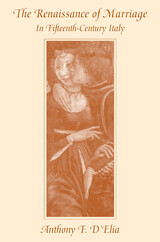 Weddings in fifteenth-century Italian courts were grand, sumptuous affairs that often required guests to listen attentively to lengthy orations given in Latin. In this book, Anthony D'Elia shows how Italian humanists used these orations to support claims of legitimacy and assertions of superiority among families jockeying for power, as well as to advocate for marriage and sexual pleasure.

Humanists stressed the value of marriage in practical terms as a means for consolidating wealth, forming political alliances, and maintaining power by providing heirs. They also presented women in a positive light, as helpmates and even examples of wisdom and learning. While D'Elia focuses on Italian courts, he also examines ideas about marriage and celibacy from Antiquity to Republican Florence and Reformation Germany, revealing the continuities and distinctions between Italian humanist and Protestant thought on marriage.

In bringing to life this fascinating elite culture, D'Elia makes a valuable contribution to the history of the Renaissance, women, and the family, and to studies of rhetoric and the classical tradition.

REVIEWS
A concise, coherent analysis of a little-studied genre--the Renaissance wedding oration introduced in the 15th century in the lavish nuptials of the Italian courts. D'Elia has turned up a very impressive corpus of sources and offers a close reading of select orations, focused on the praise of the princely rulers and their families and the praise of marriage and its advantages. He places the genre as a whole in the context of ancient and medieval views on marriage, 15th-century concerns to encourage population growth after demographic crises, and humanist models of civic virtue drawn from antiquity.
-- Ann Blair, Harvard University


In an original and well-executed book that will be of interest to scholars of Renaissance humanism, the history of women, and the history of family and social values more generally, Anthony D'Elia establishes the significance of marriage as an issue of social concern for the Italian humanists by looking at their wedding orations. His work reinforces the view, not much discussed but of great importance for an understanding of the career of Western thought, that Italian humanism was a lay, secularizing movement, marking a turning-away from the clerically dominated culture of earlier centuries.
-- Margaret King, Brooklyn College, CUNY


D'Elia shows with abundant and incontrovertible evidence that it was the Italian Humanists of the fifteenth century, not the Protestant Reformers, who in a consistent and insistent way first exalted marriage over celibacy. He thus forces us to revise radically one of the unquestioned assumptions of the history of marriage and the family.
-- John W. O'Malley, Weston Jesuit School of Theology


This book by a superb Latinist is the first in-depth study in any language of the secular oratory of Italian Renaissance humanists. D'Elia's focus on the form and content of wedding orations leads to fascinating observations on fifteenth-century views on marriage as a political, economic, and social institution, as a source of sexual pleasure, and, surprisingly, as a bond between equals.
-- Ronald G. Witt, Duke University


In sum, the author argues convincingly that the revived genre of the wedding oration provides a window into Italian Renaissance court culture and at the same time sets forth ideas that would shake up the rest of Europe in the following century. This study should be of interest to a broad range of scholars and students of the Renaissance and Reformation.
-- Jo Ann Cavallo American Historical Review

TABLE OF CONTENTS
Cover
Title Page
Copyright
Dedication
Acknowledgments
Contents
Introduction
Chapter 1. Marriage and Wisdom from Antiquity to the Renaissance
Chapter 2. The Revival of the Ancient Epithalamium in Courtly Weddings
Chapter 3. Weddings as Propaganda: Rhetoric and Court Culture
Chapter 4. The Culture of Marriage and Sex in Italian Courts
Chapter 5. Humanist Criticisms of Celibacy and the Reformation
Conclusion
A Finding-List for Wedding Orations in the Italian Renaissance
Notes
Index