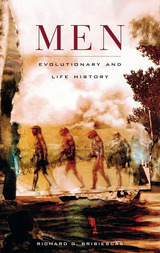 Males account for roughly 50 percent of the global population, but in America and other places, they account for over 85 percent of violent crime. A graph of relative risk of death in human males shows that mortality is high immediately following birth, falls during childhood, then exhibits a distinct rise between the ages of 15 and 35—primarily the result of accidents, violence, and risky behaviors. Why? What compels males to drive fast, act violently, and behave stupidly? Why are men's lives so different from those of women?

Men presents a new approach to understanding the human male by drawing upon life history and evolutionary theory. Because life history theory focuses on the timing of, and energetic investment in, particular aspects of physiology, such as growth and reproduction, Richard Bribiescas and his fellow anthropologists are now using it in the study of humans. This has led to an increased understanding of human female physiology—especially growth and reproduction—from an evolutionary and life history perspective. However, little attention has been directed toward these characteristics in males. Men provides a new understanding of human male physiology and applies it to contemporary health issues such as prostate cancer, testosterone replacement therapy, and the development of a male contraceptive.

Men proves that understanding human physiology requires global research in traditionally overlooked areas and that evolutionary and life history theory have much to offer toward this endeavor.
TABLE OF CONTENTS
CONTENTS
Introduction: Chachugi’s Cap
Part I. Setting the Stage
1. Change Happens
2. Birth, Death, and Everything in Between
3. The Ancestral Male
Part I. Human Male Life History
4. Stacking the Deck
5. Womb to Grow
6. Getting a Life
7. Sex and Fatherhood
8. The Male Furnace
9. Men and Medicine
10. The Old Guard
Conclusion: The Solitary Male
References
Illustration Credits
Acknowledgments
Index