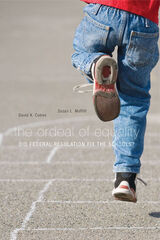 American schools have always been locally created and controlled. But ever since the Title I program in 1965 appropriated nearly one billion dollars for public schools, federal money and programs have been influencing every school in America.
What has been accomplished in this extraordinary assertion of federal influence? What hasn’t? Why not? With incisive clarity and wit, David K. Cohen and Susan L. Moffitt argue that enormous gaps existed between policies and programs and the real-world practices that they attempted to change. Learning and teaching are complicated and mysterious. So the means to achieve admirable goals are uncertain, and difficult to develop and sustain, particularly when teachers get little help to cope with the blizzard of new programs, new slogans, new tests, and new rules.
Ironically, as the authors observe, the least experienced and least well-trained teachers are often in the most needy schools, so federal support “is compromised by the inequality it is intended to ameliorate.” If new policies and programs don’t include means to create the capability they require, they cannot succeed. We don’t know what we need to enable states, school systems, schools, teachers, and students to use the resources that programs offer. The trouble with standards-based reform is that standards and tests still don’t teach you how to teach.
TABLE OF CONTENTS
Cover
Title Page
Copyright
Dedication
Contents
Acknowledgments
1. The Transformation of Title I?
2. Policy and Practice
3. Recovering from Practice Failure
4. Could Federal Policy Change Classroom Practice?
5. Mission Revised
6. A Growing Gap between Policy and Practice
7. Title I: Past and Present
8. Epilogue: What Is to Be Done
Notes
Bibliography
Index