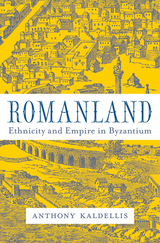 Was there ever such a thing as Byzantium? Certainly no emperor ever called himself Byzantine. While the identities of eastern minorities were clear, that of the ruling majority remains obscured behind a name made up by later generations. Anthony Kaldellis says it is time for the Romanness of these so-called Byzantines to be taken seriously.
TABLE OF CONTENTS
Cover
Title Page
Copyright
Contents
Maps
Preface
Part I. Romans
1. A History of Denial
2. Roman Ethnicity
3. Romanland
Part II. Others
4. Ethnic Assimilation
5. The Armenian Fallacy
6. Was Byzantium an Empire in the Tenth Century?
7. The Apogee of Empire in the Eleventh Century
Conclusion
Abbreviations
Notes
Bibliography
Index