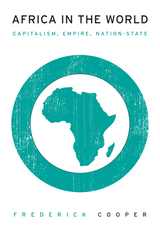 Of the many pathways out of empire, why did African leaders follow the one that led to the nation-state, whose dangers were recognized by Africans in the 1940s and 50s? Frederick Cooper revisits a long history in which Africans were empire-builders, the objects of colonization, and participants in events that gave rise to global capitalism.
TABLE OF CONTENTS
Contents
Maps
Preface
Introduction
1. Africa and Capitalism
2. Africa and Empire
3. Africa and the Nation-State
Conclusion: Africa in the World, Past, Present, Future
Notes
Index