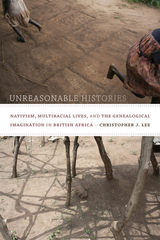 In Unreasonable Histories, Christopher J. Lee unsettles the parameters and content of African studies as currently understood. At the book's core are the experiences of multiracial Africans in British Central Africa—contemporary Malawi, Zimbabwe, and Zambia—from the 1910s to the 1960s. Drawing on a spectrum of evidence—including organizational documents, court records, personal letters, commission reports, popular periodicals, photographs, and oral testimony—Lee traces the emergence of Anglo-African, Euro-African, and Eurafrican subjectivities which constituted a grassroots Afro-Britishness that defied colonial categories of native and non-native. Discriminated against and often impoverished, these subaltern communities crafted a genealogical imagination that reconfigured kinship and racial descent to make political claims and generate affective meaning. But these critical histories equally confront a postcolonial reason that has occluded these experiences, highlighting uneven imperial legacies that still remain. Based on research in five countries, Unreasonable Histories ultimately revisits foundational questions in the field, to argue for the continent's diverse heritage and to redefine the meanings of being African in the past and present—and for the future.
AUTHOR BIOGRAPHY
Christopher J. Lee is based at the Wits Institute for Social and Economic Research, University of the Witwatersrand, Johannesburg.
REVIEWS
-- John McCracken Canadian Journal of African Studies


A Note on Illustrations ix

A Note on Terminology xi